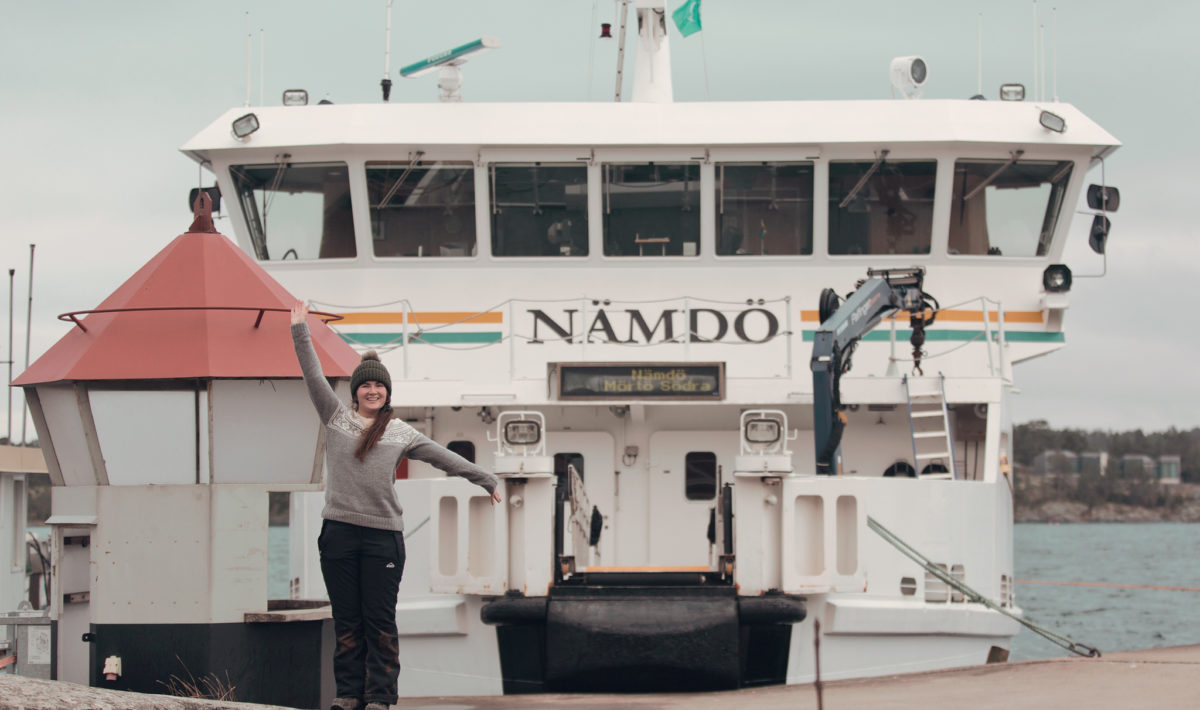 Before I continue with my posts from my trip around the Pacific Ocean, I want to share what I did two weeks ago!

As you know, I’m all for exploring places nearby. You do not have to travel to the other side of the world to see something new! I proved that by exploring the island Nämdö in Stockholm’s archipelago with my friend Annie on January 18. Read Annie’s blog post from that day here. We took a bus in the morning from Slussen to Stavsnäs and jumped on the boat to Nämdö. All of this is “free” with the SL-access card during winter by the way!


We arrived at the port Nämdöböte around 10 in the morning and were ready to explore the island.

There are a couple of different ports at Nämdö, and we decided to go to Nämdöböte. We had seen a lookout tower close to it on the map and our first mission of the day was to find it. We actually missed that there was a trail from the port to the tower, and instead went off-road and walked around in the forest, haha. Oh well, we found the tower at last and climbed to the top to enjoy the view. The lookout tower is located on the highest point on Nämdö, 42 meters above the water.

When we had climbed down from the tower, we saw a sign that said “Grottan” (meaning “The Cave”). We had to take a look at the cave and followed the trail into the woods. The cave is called “Ingemans Kula” and there were signs next to it encouraging visitors to crawl into the cave. We had to do that. The way in was quite claustrophobic, but as you get inside it’s so big that you even can stand up without any problem.

Muddy from our toes to our shoulders after the adventure in the cave, we continued the day with walking to Östanvik. Throughout the whole day, I think we only met 7 people and most of them were hunters hunting deer.

In time for lunch, and found a trail that took us to a church ruin by the water. We took some photos before we sat down on some of the remaining stones and ate the food we had brought with us. It’s not every day you have lunch in an old church ruin with an ocean view!

We had decided to take a boat back home at two from the port Solvik. We had some time to spare and explored the church in Solvik (which is built by some of the stones from Blix Church!) and photographed around the port. Once we were on the boat, we decided to buy some cinnamon rolls which we ate while watching the sunset on the ocean. It had been rainy and cloudy all day, until it was time to go home, haha.


We had such a great day anyway!

Check out some other islands I have visited in Stockholm’s archipelago!